In recognition of the 89th Academy Awards, we’re featuring our favorite new releases in the fields of film history. Which ones will you read?

Showman of the Screen: Joseph E. Levine and His Revolution In Film Promotion

Short, immaculately dressed, and shockingly foul-mouthed, Joseph E. Levine (1905–1987) was larger than life. He rose from poverty in Boston’s West End to become one of postwar Hollywood’s most prolific independent promoters, distributors, and producers. Alternately respected and reviled, this master of movie promotion was responsible for bringing films as varied as Godzilla: King of the Monsters! (1956), Hercules (1958), The Graduate (1967), The Lion in Winter (1968), and A Bridge Too Far (1977) to American audiences.

In Showman of the Screen: Joseph E. Levine and His Revolution In Film Promotion, the first biography of this controversial pioneer, A. T. McKenna traces Levine’s rise as an influential packager of popular culture. Despite his significant accomplishments and prominent role in shaping film distribution and promotion in the post-studio era, Levine is largely overlooked today. McKenna’s in-depth biography corrects misunderstandings and misinformation about this colorful figure, and offers a sober assessment of his contributions to world cinema. It also illuminates Levine’s peculiar talent for movie- and self-promotion, as well as his extraordinary career in the motion picture business.

On October 22, 1950, the Screen Directors Guild (SDG) gathered for a meeting at the opulent Beverly Hills Hotel. Among the group’s leaders were some of the most powerful men in Hollywood—John Ford, Cecil B. DeMille, Joseph L. Mankiewicz, John Huston, Frank Capra, William Wyler, and Rouben Mamoulian—and the issue on the table was nothing less than a vote to dismiss Mankiewicz as the guild’s president after he opposed an anticommunist loyalty oath that could have expanded the blacklist. The dramatic events of that evening have become mythic, and the legend has overshadowed the more complex realities of this crucial moment in Hollywood history. 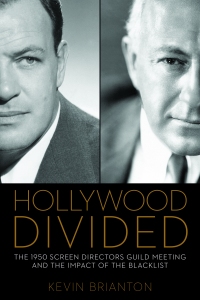 In Hollywood Divided, Kevin Brianton explores the myths associated with the famous meeting and the real events that they often obscure. He analyzes the lead-up to that fateful summit, examining the pressure exerted by the House Un-American Activities Committee. Brianton reveals the internal politics of the SDG, its initial hostile response to the HUAC investigations, the conservative reprisal, and the influence of the oath on the guild and the film industry as a whole. Hollywood Divided also assesses the impact of the historical coverage of the meeting on the reputation of the three key players in the drama. 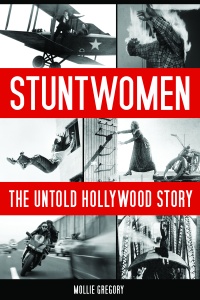 They’ve traded punches in knockdown brawls, crashed biplanes through barns, and raced to the rescue in fast cars. They add suspense and drama to the story, portraying the swimmer stalked by the menacing shark, the heroine dangling twenty feet below a soaring hot air balloon, or the woman leaping nine feet over a wall to escape a dog attack. Only an expert can make such feats of daring look easy, and stuntwomen with the skills to perform—and survive—great moments of action in movies have been hitting their mark in Hollywood since the beginning of film.

Here, Mollie Gregory presents the first history of stuntwomen in the film industry from the silent era to the twenty-first century. For decades, stuntwomen have faced institutional discrimination, unequal pay, and sexual harassment even as they jumped from speeding trains and raced horse-drawn carriages away from burning buildings. Featuring sixty-five interviews, Stuntwomen showcases the absorbing stories and uncommon courage of women who make their living planning and performing action-packed sequences that keep viewers’ hearts racing.

Among silent film comedians, three names stand out—Charlie Chaplin, Buster Keaton, and Harold Lloyd—but Harry Langdon indisputably deserves to sit among them as the fourth “king.” In films such as The Strong Man (1926) and Long Pants (1927), Langdon parlayed his pantomime talents, expressive eyes, and childlike innocence into silent-era stardom. This in-depth biography, which features behind-the-scenes accounts and personal recollections compiled by Langdon’s late wife, provides a full and thoughtful picture of this multifaceted entertainer and his meteoric rise and fall.

In Harry Langdon: King Of Silent Comedy, authors Gabriella Oldham and Mabel Langdon explore how the actor developed and honed his comedic skills in amateur shows, medicine shows, and vaudeville. Together they survey his early work on the stage at the turn of the twentieth century as well as his iconic routines and characters. They also evaluate his failures from the early sound period, including his decision to part ways with director Frank Capra. Despite his dwindling popularity following the introduction of talkies, Langdon persevered and continued to perform in theater, radio, and film—literally until his dying day—leaving behind a unique and brilliant body of work.

He’s Got Rhythm: The Life and Career of Gene Kelly

He sang and danced in the rain, proclaimed New York to be a wonderful town, and convinced a group of Parisian children that they had rhythm. One of the most influential and respected entertainers of Hollywood’s golden age, Gene Kelly revolutionized film musicals with his innovative and timeless choreography. A would-be baseball player and one-time law student, Kelly captured the nation’s imagination in films such as Anchors Aweigh (1945), On the Town (1949), An American in Paris(1951), and Singin’ in the Rain (1952).

In He’s Got Rhythm: The Life and Career of Gene Kelly, the first comprehensive biography written since the legendary star’s death, authors Cynthia Brideson and Sara Brideson disclose new details of Kelly’s complex life. Not only do they examine his contributions to the world of entertainment in depth, but they also consider his political activities—including his opposition to the Hollywood blacklist. The authors even confront Kelly’s darker side and explore his notorious competitive streak, his tendency to be a taskmaster on set, and his multiple marriages. Drawing on previously untapped articles and interviews with Kelly’s wives, friends, and colleagues, Brideson and Brideson illuminate new and unexpected aspects of the actor’s life and work. He’s Got Rhythm is a balanced and compelling view of one of the screen’s enduring legends.

My Life in Focus

When Gianni Bozzacchi accepted an assignment as a photographer on the set of The Comedians (1967), he didn’t know that his life was about to change forever. His ability to capture the beauty of candid moments drew the attention of the film’s star, Elizabeth Taylor, and prompted her to hire him as her personal photographer. Not only did he go on to enjoy a jet-set life as her friend and confidant—preserving unguarded moments between the violet-eyed beauty and Richard Burton as they traveled the world—but Bozzacchi also became an internationally renowned photographer and shot some of the biggest celebrities of the 1960s and 1970s. 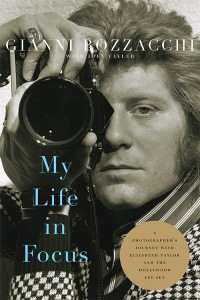 In My Life in Focus, Bozzacchi traces his journey from humble beginnings to the sphere of the rich and famous. Beautifully illustrated with many of the photographer’s most iconic images, this lively memoir reveals private moments in the Taylor-Burton love story and provides an invaluable behind-the-scenes look at the business of filmmaking and the perils of celebrity.

Welcome back from the holiday break! Pardon us while we brush off the cobwebs and shake out the mothballs in our brains…

Our break was full of all kinds of exciting news and tidbits, like this fascinating article from Terri Crocker (The Christmas Truce: Myth, Memory, and the First World War) in the New Republic: 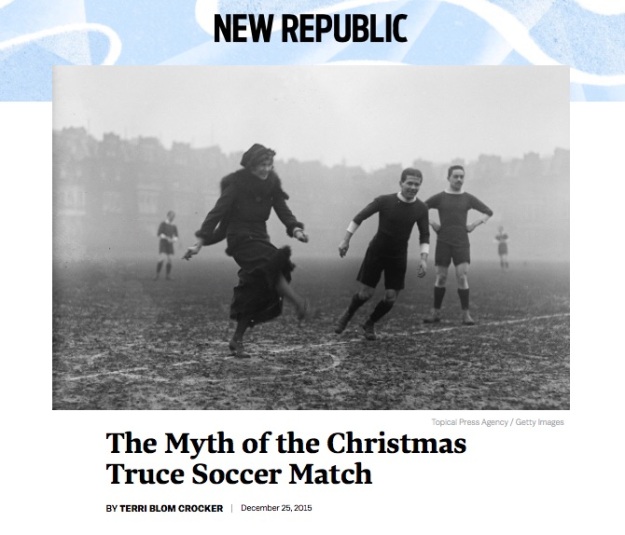 “Perhaps it is time we stopped expecting history to behave like a good story—featuring obvious heroes and villains, a dash of irony and a clear moral, with a football match thrown in for good measure—and start assuming it looks more like real life: messy, inconclusive and hard to pin down. Since history is, after all, just life that happened in the past, it’s time for us to get over our need for simplicity, and accept that the past, just like the Christmas truce, is always a lot more complicated than we want to believe.”—Terri Crocker for the New Republic

Over the break we also celebrated Bradley Birzer’s

Russell Kirk: American Conservative, a biography of the great public intellectual, being named one of the Library of Michigan’s Notable Books of 2016. Kirk’s The Conservative Mind shaped conservative thought in the latter half of the twentieth century.

Elsewhere, Russell Kirk was listed as one of the Best Books of the Year by Daniel McCarthy, editor of the American Conservative

The high-flying, tumbling, falling, gutsy heroines in Molly Gregory’s Stuntwomen: The Untold Hollywood Story have been featured in the New York Times, the New Republic, Variety.com, on NPR’s Weekend Edition, and now in the Washington Post.

“Much like the story of women in almost any industry, this one is a tale of struggle, progress and tempered triumph. . . . In her engaging and enlightening book, Gregory digs into this little-known corner of Hollywood history and gives voice to the women who have risked their lives for a few (perilous) moments on the big screen.”—Becky Krystal, Washington Post

For the late holiday shoppers, The Baltimore Sun suggested Lincoln’s Final Hours: Conspiracy, Terror, and the Assassination of Our Greatest President, and the Louisville Courier-Journal had a whopping 38 suggestions for local books to give as gifts, including: Kentucky By Design, The Birth of Bourbon , The Manhattan Cocktail, and Venerable Trees.

This morning, on the first day back in the office after break, we were greeted with a lovely surprise from the inimitable columnist Liz Smith, who offers this excellent preview of Conversations with Classic Film Stars: Interviews from Hollywood’s Golden Era, one of our most anticipated books of 2016!

We hope you had a restful holiday (or a grand adventure!) Holler at us in the comments or on Twitter and let us know how you spent your winter break.

We’ve been doing backflips this week for “Put The Girl in Danger!,” an excerpt from Mollie Gregory’s new book, Stuntwomen: The Untold Hollywood Story, that was published in the New Republic.

Read the preview below, then click over for the full excerpt.

Put The Girl in Danger!

Helen Gibson’s strong, handsome face and dark hair gave her the look of someone who would try anything. In 1915, while in her early twenties, she was doubling for the star of the hit serial The Hazards of Helen. In one stunt she was supposed to leap from the roof of the station to the top of a moving train. Years later, she called it her most dangerous stunt. “The distance between the station and the train was accurately measured,” she said, and she had practiced the jump several times while the train was standing still. But for the shot, the train would be picking up speed for about a quarter of a mile. “I was not nervous as it approached and I leaped without hesitation,” she recalled. She landed safely, but the rocking motion of the train rolled her straight toward the end of the car. Just before being pitched off, “I caught hold of an air vent and hung on.” Then, with a sense of the dramatic, Gibson let her body “dangle over the edge to increase the effect on the screen.” She brought the same strength and flair to scores of other action scenes.