A Girl’s A Gun by Rachel Danielle Peterson, 50% off

As the holiday season quickly approaches, what better gift to give your loved ones than a book. The University Press of Kentucky is pleased to announce the start of their 2018 Holiday Sale, which is the perfect opportunity to purchase affordable, yet thoughtful, presents for everyone on your list. With special pricing and discounts up to 75%, this sale is a wonderful chance to stock up for the holidays. Most 2018 titles are 40% off, while older releases are 50% off. In addition, select new releases and special titles have set markdowns of $5–$10. There are books for history fans, film enthusiasts, military buffs, and many more, especially Kentuckians interested in regional titles. With such a broad selection, there are sure to be books that will please even the most hard-to-buy-for people on your list. 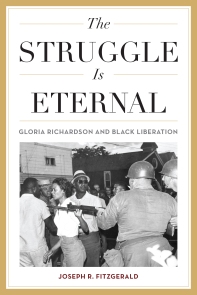 The Struggle is Eternal by Joseph R. Fitzgerald, 40% off

Among the featured titles are new and recent releases in fiction, Amreekiya: A Novel, Make Way for Her: And Other Stories, Patchwork: A Bobbie Ann Mason Reader, and The Birds of Opulence. Authored by women writers and featuring female protagonists, these books speak to the human experience and describe interpersonal relationships in striking ways. Black Bone: 25 Years of the Affrilachian Poets and Mend: Poems are recent collections that lend voice to marginalized groups—African-American writers from Appalachia and female slaves subjected to medical experimentation without their consent. 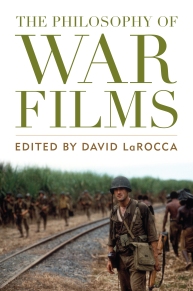 The Philosophy of War Films edited by David LaRocca, 40% off

For those interested in Kentucky history, Elkhorn: Evolution of a Kentucky Landscape, Forty Minutes to Glory: Inside the Kentucky Wildcats’ 1978 Championship Season, and A New History of Kentucky, second edition are featured. Named the 2018 Thomas D. Clark Medallion Book, Elkhorn chronicles the rich history and culture surrounding Elkhorn Creek, the second largest tributary of the Kentucky River. As basketball season begins, Forty Minutes to Glory is the perfect title for every member of the Big Blue Nation. The second edition of A New History of Kentucky is a revised and updated volume of the flagship history of the state history that brings the Commonwealth’s story into the twenty-first century.

Regional favorites like Burgoo, Barbecue, and Bourbon, The Kentucky Bourbon Cookbook, and The Beer Cheese Book are also included in this sale. The University Press of Kentucky is offering free shipping on orders over $75 in honor of their 75thanniversary. To view a full list of the titles featured in this promotion, visit www.kentuckypress.com. Orders should be placed by December 1 to guarantee Christmas delivery, and sale prices are valid through January 31, 2019. To order visit www.kentuckypress.com or call 800-537-5487 and use the discount code FHOL.

Bette Davis’s feud with Joan Crawford is famous and is being well-documented on FX’s Feud: Bette and Joan, but Crawford was not the only actress with whom Davis established a rivalry. In this excerpt from the forthcoming Miriam Hopkins: Life and Films of a Hollywood Rebel, Allan R. Ellenberger details the central points of the feud that erupted between Hopkins and Davis on the set of 1939’s The Old Maid, perhaps an early hint at the rivalry that would erupt between Davis and Crawford some two decades later:

Whether described as a ‘woman’s picture,’ ‘tearjerkers’ or a ‘soap opera,’ the melodrama has been a standard since the early days of the silent cinema. The maternal melodrama, a sub-genre featuring plots of self-sacrificing, mother-loving figures who suffer adversity best describes Miriam’s first film at Warner Bros. – The Old Maid. Similar films include The Sin of Madelon Claudet, Imitation of Life, and the twice-filmed Stella Dallas.

In the late 1930s and into the following decade, Bette Davis was a staple in the melodramatic maternal film. Along with The Old Maid’s director Edmund Goulding, executives paired them in 1937’s That Certain Woman, about a sacrificial mother following an annulled marriage. Then two years after The Old Maid, they made The Great Lie where newly-widowed Davis offers to bring up the child of her husband’s pregnant ex-wife (Mary Astor). The Old Maid shared a similar plot-line: Davis as a cynical ‘old maid’ spinster who gives her illegitimate child to her self-centered cousin (Hopkins) to raise.

Filming began on Wednesday, March 15, 1939, with Edmund Goulding directing. Goulding knew Davis well, directing her in two films at Warners: the above mentioned That Certain Woman and, the film Miriam hoped would be hers, Dark Victory. But he knew Miriam longer, beginning with the New York social circles in the late 1920s, and later at Astoria Studios where they both were making films.

The first day, the cast reported to the sound stage at nine o’clock, but Miriam was ten minutes late, wearing a replica of a dress Davis wore in Jezebel [a film which Davis won an Oscar for and which Miriam believed should have been her starring role]. Davis claimed that Miriam hoped she would “blow my stack at this.”

Both Miriam and Davis suggested to Goulding how they could improve their roles. At first, unit manager Al Alleborn reported that each one had “little suggestions in the working out of scenes and getting the characterizations of their parts which did cause a slight delay on the first day, but company is now going smoothly.” It was short-lived.

The first two days, Goulding filmed the original opening scene in Mr. Painter’s lingerie shop, where the cousins and their grandmother are buying Delia’s trousseau. However, Davis wanted to enhance her role at Miriam’s expense. William Wyler had taught her that an actor’s first appearance in a film established their character. When they completed the lingerie shop sequence, Davis wanted to cut the scene. Instead, the opening sequence would be Delia’s wedding day.

The following day, Friday, March 17, Miriam was on Stage 15 at nine o’clock, an hour earlier than Davis. Assuming that she had already established her character in the lingerie shop, Miriam played the scene at a lower register. She had no idea this scene would be the audience’s first glimpse of her. So when Davis entered, excited and enthusiastic, people noticed. 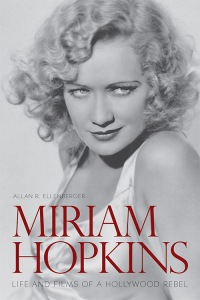 A month later, when Goulding cut the lingerie shop scene, Miriam sensed what Davis had done. By then she was using “every trick in the book” to rile her co-star. Davis was fascinated, “watching them appear one by one.” Miriam’s scene-stealing stunts were endless: a button would come undone, or a hairpin would fall out. She would change her position in close-ups and then inch her way upstage so Davis would turn away from the camera, sometimes at the expense of losing her light.

Considering Miriam needed this film to salvage her career, this unprofessional—and costly—behavior could finish her. She was fighting to be popular with audiences but allowed her loathing of Bette Davis to rule her emotions.

Davis admitted Miriam was a good actress and was perfect for the role, so it baffled her why she behaved as she did. Did Davis know Miriam was seeking revenge for her aggressive acts, including stealing Jezebel, the Academy Award that went with it and the weekend fling with her husband? It’s unlikely. Instead, Davis played dumb and was the victim, claiming she controlled her temper during the day, but at night she “screamed at everybody.”

The Davis-Hopkins thespian duel threatened innocent bystanders as well. Rand Brooks, who also appeared that year in the classic Gone with the Wind, played Delia’s son, Jim Ralston, Jr. He later recalled both actresses tried directing him. “One would tell me one thing, (and) then the other would say something else. They were both so anxious to look good and be better than the other. Edmund Goulding just stood by and was amused by the whole thing.”

Goulding tried to be a mediator. He respected Davis, but he was Miriam’s friend. To his credit, he tried keeping the peace. “Whatever respect they had for each other as professionals was quickly thrown out of the window when one or the other didn’t get her way,” Goulding said of the two women. “If it wasn’t lighting, it was costuming or camera angles or lines. There were times they behaved like perfect little bitches, but I loved them both, and I think the admiration was likewise.”

Unit manager Al Alleborn acknowledged Goulding’s struggles. “Working with two impossible people like Davis and Hopkins, many things have to be ironed out… Goulding has a tough job on this picture with these two girls. Not that they want to cause him any trouble or worry, but each one is fighting for a scene when they go into it.”

The rumors spread about friction on the set. The Warner’s publicity department concocted a scheme that Davis and Miriam agreed to. Davis told a reporter “Hoppy [her nickname for Miriam] and I are going to get a couple of pairs of boxing gloves and pose for a picture glowering at each other like a couple of fighters in their corners. It’s the only answer we can make to all the nonsense about how we can’t get along.”

In their silk dresses and bodices and shawls, they donned boxing gloves and posed for a picture with a worried-looking Edmund Goulding between them. Hedda Hopper reported the actresses had a sense of humor. Even so, she “never knew two blondes yet who were real palsie- walsies!”

Miriam’s sense of humor was waning; the staged photograph made matters worse. “Now they call me ‘Hardboiled Hopkins. I’m not.” she insisted, “I’m not temperamental and not hard to get along with. It’s those boxing gloves that caused all the trouble. But everyone forgot it was just a gag. They took it seriously.”

Hal Wallis, who witnessed their antics, confirmed their hatred for each other was real. “It was an incredible feud, just fantastic,” Wallis claimed in an interview years later. “They would each prolong their arrival on the set, trying to make the other wait. I think later the studio tried to claim it was all just publicity, but it was the real thing. Those girls hated each other.”

excerpted from Miriam Hopkins: Life and Films of a Hollywood Rebel (Kentucky, 2017)

Read more about Hopkins and Davis in Miriam Hopkins: Life and Films of a Hollywood Rebel, available here.