In addition to authors who will be signing their books on the main arena floor on November 17, the Kentucky Book Fair will host a series of panel discussions and presentations for authors and readers alike on the main stage and in breakout rooms that day. Several panels include UPK authors eager to share their work:

The Kentucky Book Festival will be holding a series of events throughout the week at several different locations around Lexington. The events include readings, cocktail parties, trivia, and more:

Dedicated to honoring the profession of writing and to providing a format for authors to meet their reading public, the Kentucky Book Fair attracts thousands of avid readers and patrons nationwide. Featuring a broad range of titles including children’s books, military history, mystery, nature, fiction, and nonfiction, the fair attracts promotes reading across genres and age levels. Founded in 1981, the Kentucky Book Fair is the state’s leading literary event.

Here at the University Press of Kentucky, we recently completed an initiative to digitize all of the books that we’ve published since our founding in 1943. It was a lot of work going through more than 1300 books, but it’s been a process full of fun surprises and astounding discoveries. Best of all, every now and then, there was a book that we just couldn’t put down—a book so good we just can’t resist sharing it with you again: 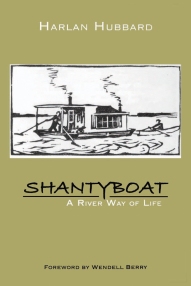 Harlan Hubbard was born in Bellevue, Kentucky, on the banks of the Ohio River. It was the river and Henry David Thoreau’s writings that inspired Hubbard at an early age to become a simple man, “living on the fringes of life.” Hubbard had a vision which guided him to live on the earth and not of the world—a way of living that he shared with his wife Anna—and which took them on their voyage down the Mississippi River into the bayou country of Louisiana.

In the opening to Shantyboat: A River Way of Life, Harlan Hubbard evocatively explains what it’s like to “shove out into the current, to feel the life and power of the river.” Enjoy an excerpt from this classic work below.

A river tugs at whatever is within reach, trying to set it afloat and carry it downstream. Living trees are undermined and washed away. No piece of driftwood is safe, though stranded high up the bank; the river will rise to it, and away it will go.

The river extends this power of drawing all things with it even to the imagination of those who live on its banks. Who can long watch the ceaseless lapsing of a river’s current without conceiving a desire to set himself adrift, and, like the driftwood which glides past, float with the stream clear to the final ocean?

With me, the attraction of flowing water goes back as far as I can remember. My river is the Ohio, whose channel from the first has borne the dreams of men from the old and known to the new and strange. The early voyages were made in quest of a Golden Fleece which to some meant a new, free land in the west, to others a better market in the south for their homemade and home-grown products. To these men the river was first of all a means of transportation. Some of them must have loved the river for its own sake, or learned to love it, for they made repeated voyages downstream, selling boats and cargoes in the south, and toiling overland back to their starting places, like boys dragging their sleds uphill to coast down again.

These drifting argosies came to an end with the perfecting of the steamboat, which, overcoming the laws of nature, was able to go upstream as well as down. The tradition of drifting was carried into our day by an amphibious race usually called shantyboaters. A shantyboat is a scow with a small house on it. Nearly always a homemade job, it is put together of odd scraps of material and pieces of driftwood and wreckage. The shantyboat may be embellished by any of the appurtenances of living. Yet it is more than a floating homestead: it is an ark which the river bears toward a warmer climate, better fishing grounds, and more plentiful and easier work on shore. The voyage often begins near headwaters, or on one of the river’s tributaries. At one place after another the hopeful boatman lays over for a spell, until disillusioned, he lets his craft be caught up again by the river’s current, to be carried like the driftwood, farther downstream. At last he beaches out for good somewhere in the south, where his children pass for natives.

A shantyboat on its way, drifting slowly along in the swirling current, is a sight to see—colorful and gay, yet, too, of a somewhat pathetic drabness: women and children peek out of windows; dogs bark from the decks, which are draped with lines and other gear; the roof is piled with plunder, a crate of chickens or pigs, fish boxes, and piles of nets; wood smoke from the cookstove in the cabin rises through a crooked chimney; the master guides his clumsy craft with long sweeps, or oars; a collection of johnboats and perhaps a small scow trail along.

Some boats are so neatly constructed, fitted, and kept up, being painted handsomely, with railings to the decks and curtains to the windows, that shantyboat is not a suitable name. Nor will houseboat do: it is too prosaic a term for the unfixed dwelling of water gypsies and nonconformists.

The true shantyboater has a purer love for the river than had his drifting flatboat predecessors. These were concerned with trade or new land. To him the river is more than a means of livelihood. It is a way of life, the only one he knows which answers his innate longing to be untrammeled and independent, to live on the fringe of society, almost beyond the law, beyond taxes and ownership of property. His drifting downstream is as natural to him as his growing old in the stream of time. Away from the river he languishes, as if taken from his natural element.

It is to be regretted that the race of shantyboaters is dying out. Today you are likely to find even an active fisherman living in a house on land, or in a trailer. Those who still live on the water have motorboats to shove their fleet upstream—and down, too—so that the art of drifting is forgotten. The younger generation seem to have interests away from the river. They will never be able to tell the tales their granddads can.

I cultivated the acquaintance of old-time river people whenever possible, and listened to their yarns almost with reverence. The simplicity and naturalness of their way of living fascinated me, and gave a definite shape to the vague longing which the flowing river had inspired.

Other books by or about Harlan and Anna Hubbard: