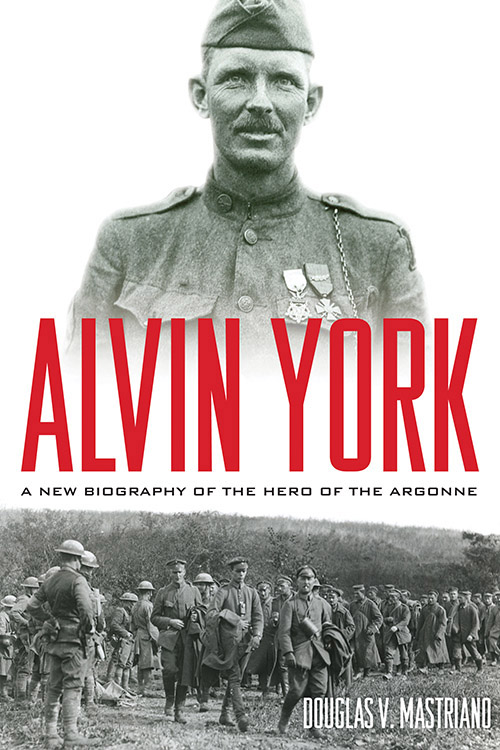 Alvin C. York (1887–1964)—devout Christian, conscientious objector, and reluctant hero of World War I—is one of America’s most famous and celebrated soldiers. Known to generations through Gary Cooper’s Academy Award-winning portrayal in the 1941 film Sergeant York, York is credited with the capture of 132 German soldiers on October 8, 1918, in the Meuse-Argonne region of France—a deed for which he was awarded the Congressional Medal of Honor.

At war’s end, the media glorified York’s bravery but some members of the German military and a soldier from his own unit cast aspersions on his wartime heroics. Historians continue to debate whether York has received more recognition than he deserves. A fierce disagreement about the location of the battle in the Argonne forest has further complicated the soldier’s legacy.

Learn more about the controversy from noted York scholar Douglas V. Mastriano, author of the new book, Alvin York: A New Biography of the Hero of the Argonne.

There’s been controversy about where the actual events of York’s historic actions took place. Can you explain some of the controversy?

The controversy about the location of the York site began in 1929 when the US Army wanted to stage a reenactment of the York battle in Washington DC during their annual exposition. The Army contacted York’s commanders (Captain Danforth and Lieutenant Colonel Buxton) to come up with a map of the location. Buxton and Danforth had no clue where York fought as neither was with him during the battle. In fact, Buxton by then was on the division staff and was nowhere near York’s action. Danforth was busy leading his men more than a kilometer away from where York’s fight took place. This notwithstanding, Buxton and Danforth gave it a wild guess and put an “X” on a random spot on a map, but warning the Army not to use the map, knowing that it was grossly inaccurate. Yet, the Army filed the map away and eventually it ended up in the National Archives where York enthusiasts grabbed hold of it years later thinking that they had stumbled upon the answer to the location of the battlefield. Unfortunately, the previous warning was ignored by researchers who used it as their primary source on York’s location in France. As you can imagine, the map led to nowhere and a flimsy case was built around the Danforth spot as being where the fight occurred.

History demonstrates that the York site was really never lost. In fact, accurate maps in both the German and American archives, made by eyewitnesses, had always pinpointed the location 600 meters north of the erroneous Danforth map. I spent more than 1,000 hours studying these maps, eyewitness accounts, unit reports and after-action reviews related to the York fight and found them highly accurate and verifiable. There is no debate as to where it happened from either the American or German perspective.

What is it that sets your research apart?

To find where York fought required a well-rounded historical approach that integrated data from both German and American sources. Amazingly, no other researcher had used the German archives to study the York fight. Additionally, we applied military terrain analysis, looking at the ground as the soldiers would have seen it, battlefield archeology, and ballistic forensics. This was a rigorous process that allowed us to get to the bottom of the York story both historically and scientifically without relying upon subjective interpretations or mental gymnastics.

What, in your opinion, is the biggest misconception about the Sergeant York story?

The biggest misconception is that York performed his action “single-handedly.” Neither the Army nor York ever claimed that what he did was single-handed. This notion began in April 1919 when the media caught wind of the York feat and spun the tale with some hyperbole and drama. Yet, to his dying day, York never discounted the role of the other Americans on that
fateful morning.