Celebrate with new and vintage apple-flavored favorites from some of UPK’s best-loved cookbooks: 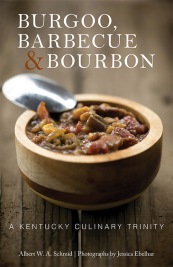 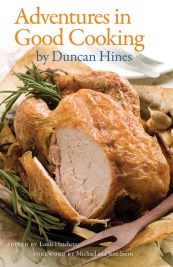 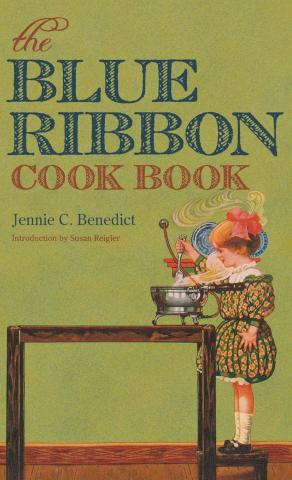 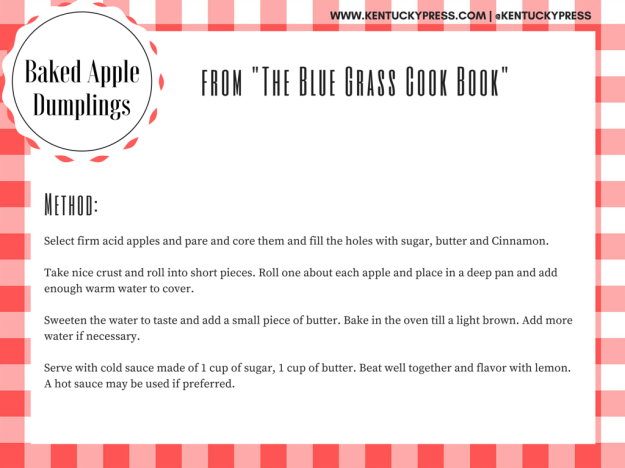 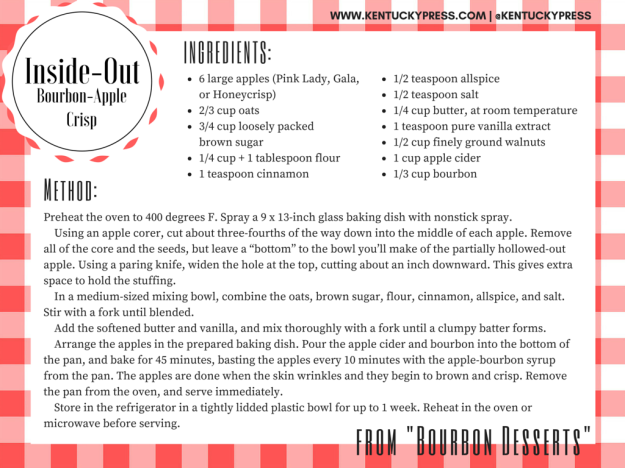 We’re in the holiday spirit here at the University Press of Kentucky, and we wanted to share a little of that cheer with our fans. All week we’ve been giving away a new book in a new way to a lucky someone.

We thought we’d close out our #5DaysOfGiveaways with a bang! Or, at the very least, a party… We’re calling it Festive, Free-f0r-all Friday, and here’s how it works:

We’ll be sharing menus and recipes to help you throw the greatest, most Bluegrass-y, Kentucky Holiday Celebration from some of our favorite Kentucky cookbooks. Join in on our fun on any of our social media accounts, and you’ll be automatically entered to win. One lucky fan/follower/subscriber/etc. will win a prize pack of ALL the books we’ve given away this week! Including The Kentucky Fresh Cookbook, a bourbon cocktail book (your choice), Out of Kentucky Kitchens, and The Blue Grass Cook Book, the prize pack will help you host a holiday fit for a Kentucky Colonel.

But what’s a party without a plan? Here are some great holiday menus (new and old) to get the festivities started!

With a book dedicated solely to cooking with bourbon, it’s only fitting Albert Schmid, author of The Kentucky Bourbon Cookbook, would include a little bit of the history behind this beloved beverage.

Most people believe a Baptist minister, the Reverend Elijah Craig, was the first person to distill bourbon, circa 1789. It was a very convenient legend for the forces trying to repeal Prohibition. After all, how bad can bourbon be if it was invented by a Baptist minister? But, the truth is that no one really knows who invented bourbon. Some of the favorite candidates include Evan Williams, James Ritchie, and Wattie Boone (Daniel’s cousin).

Despite the myth surrounding its origin, in 1964 Congress officially named bourbon America’s native spirit and the beverage became the most regulated whiskey in the world, having to meet strict criteria in order to be labeled “bourbon.” The requirements for bourbon are these:

Many people think of bourbon as a dessert because of its deliciously sweet taste. But what happens when you actually add bourbon to a dessert? Pure magic. You can take our word for it on this one.

You might already be familiar with the traditional bourbon desserts that are popular in and around the Bluegrass state. Bourbon Balls, a sinfully delicious candy made with bourbon, chocolate, and pecans, have been a staple of the bourbon-dessert industry for decades.

For fans of colder treats, Bourbon Ball Ice Cream has become an increasingly popular dessert to many. Keeneland has been adding bourbon to their famous bread pudding for years—and you don’t hear anyone complaining!

Now that we’ve gotten your attention, we’re sure you want to try all of these desserts yourself. Just to ensure that we weren’t making anything up and to do some of your own field research, of course.

The best place to start your bourbon dessert journey is in UPK’s book Bourbon Desserts by celebrated food writer and home chef, Lynn Marie Hulsman. The title says it all people.

This book features more than seventy-five decadent desserts using America’s native spirit. Hulsman brings together a collection of confections highlighting the complex flavor notes of Kentucky bourbon, which are sure to delight the senses. Giving readers the confidence to prepare these easy-to-execute desserts, this cookbook also features fun facts about bourbon and its origins as well as tips and tricks for working in the kitchen.

Interested? We know. Keep reading for a never-before-seen recipe from the book!

Growing up, I heard lots of talk from my Grandma and the ladies in her front-room, one-chair beauty salon about “reducing.” Apart from cantaloupe and cottage cheese, or half a grapefruit with a maraschino cherry on top, the only virtuous dessert was angel food cake. I never cared for the sticky, Styrofoam redolent packaged concoctions from the supermarket, though. Here’s my twist: A homemade version that actually tastes like wholesome food. Perhaps it’s a little lighter, with fewer calories than some desserts. I don’t really care. I’m after thrills like bourbon and chocolate, and they’re in there. Sinful? You decide.

Grease a 10-inch x 4-inch tube pan with butter, dust it with flour, and set it aside.

Preheat the oven to 350 degrees F.

Add the cocoa to the flour, then sift together three times. Add the cream of tartar, and sift the dry mixture together one more time, then set it aside.

In a separate large mixing bowl, combine the sugar and salt, and sift them together four times, then set the mixture aside.

Using an electric mixer, set to medium-high speed, beat the egg whites until stiff, but not dry, until you have medium-high peaks, about 5 minutes.

Sprinkle on enough of the flour-cocoa mixture to dust the top of the foam without collapsing it, then gently fold it in with a spatula. Alternate with small amounts of the sugar-salt mixture, and continue until all of the dry ingredients are folded into the egg whites.

Add the bourbon to the mixture, and fold in gently using the spatula.

Pour the batter into the prepared cake pan, and bake for 15 minutes at 350 degrees F. After 15 minutes, reduce the heat to 300 degrees F, and bake for 45 more minutes or until a wooden cake tester or metal skewer inserted into the center of the cake comes out clean.

Invert the entire pan onto a wire rack on the countertop, and allow it to cool for two to three hours. Once it’s cool, loosen the cake from the pan using a butter knife, and set it upright on a cake plate.

Store in an airtight plastic cake safe or tin for up to 1 week.

If you’re interested in buying the book, you can pre-order it on our website. It’s expected to be released in August of this year! Be sure to check out Hulsman’s website if you can’t get enough of this talented author!

Congratulations to Chef Albert W.A. Schmid! His Kentucky Bourbon Cookbook has won the Gourmand International award for the Wine Category: Best Cooking with Drinks Book. We always knew it was an amazing cookbook, and now the world knows too! For a full list of winners click here.

Pictures from the ceremony in Paris below: