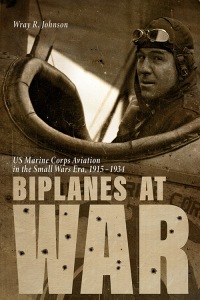 We’re giving a book away this week! One lucky reader will win a book of their choice, choosing from seven of our newest titles. From now until Sunday, July 21, we will spotlight one of the books up for grabs on our blog. Answer our questions in the comments or on social media, and you’ll be entered into the drawing! For more details on the giveaway, CLICK HERE.

Today’s feature title is Biplanes at War: US Marine Corps Aviation in the Small Wars Era, 1915-1934. Unlike the relative uniformity of conventional warfare, small wars prevent a clear definition of rules and roles for military forces to follow. During the small wars era, the US military had only recently begun battling in the skies but recognized the unique value and flexibility of aviation. This book provides a riveting history of the Marines’ use of biplanes between the world wars in Haiti, the Dominican Republic, China, and Nicaragua and chronicles how the Marines used aircraft to provide supporting fire to ground troops, to evacuate the wounded, to transport cargo, and even to support democratic elections. Biplanes at War sheds light on how the Marines pioneered roles that have become commonplace for air forces today, an accomplishment that has largely gone unrecognized in mainstream histories of aviation.

Apart from their military and transportation usefulness, airplanes are also pretty cool to look at. We hope you enjoy this slideshow of early biplanes featured in the book!

If you had to hop in one of these planes right now and fly across the Atlantic, would you trust them? Which of the planes above would you trust the most? Let us know in the comments and you’ll be entered to win Biplanes at War: US Marine Corps Aviation in the Small Wars Era, 1915-1934 or another book of your choice from seven of our newest titles.

CLICK HERE to learn more or to order Biplanes at War: US Marine Corps Aviation in the Small Wars Era, 1915-1934

On this date 75 years ago, eighty American airmen aboard sixteen B-25B medium bombers launched an attack against the Japanese Home Islands. Despite a series of technical challenges, the raiders, commanded by Lieutenant Colonel James “Jimmy” Doolittle, managed to take off from the aircraft carrier USS Hornet and bomb military targets in cities across Japan. Forced to ditch or crash along the coast of China, all but three of the eighty men survived the mission, although eight of those were captured by the Japanese.

This attack­­—the first of its kind—did relatively little material damage, but proved that Japanese cities were within the reach of the American war machine and vulnerable to aerial bombardment. It boosted the morale of an American public left reeling by Pearl Harbor, and was an important turning point in the Pacific War.

The remarkable story of Doolittle’s Raiders is a legendary chapter in the annals of military aviation history. The University Press of Kentucky is now seeking manuscripts for a new Aviation and Airpower series dedicated to such stories.

In this new series, edited by Brian D. Laslie, each volume will bring together leading historians and emerging scholarship in the fields of military aviation and air power history. The series seeks a broad-based look at aerial battles, air warfare, and campaigns from the First World War through modern air operations, but also seeks works on the heritage, technology, and culture particular to the air arm. Biographies of leading figures are also sought. This series seeks to cover the American Air Force, Army, and Naval aviation, but also other world powers and their approaches to the history and study of the air arm.

Brian D. Laslie is Deputy Command Historian at NORAD and US Northern Command as well as an adjunct professor at the U.S. Air Force Academy. He is author of The Air Force Way of War: U.S. Tactics and Training after Vietnam, chosen for the Chief of Staff of the Air Force’s professional reading list in 2016, and Architect of Air Power: General Laurence S. Kuter and the Birth of the US Air Force. 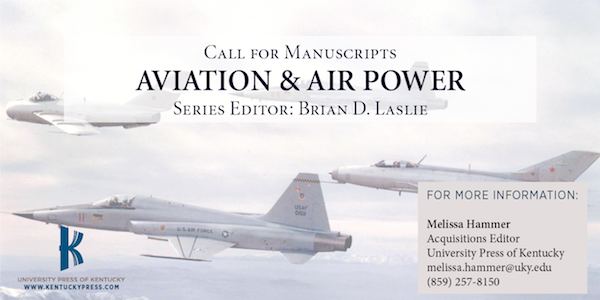