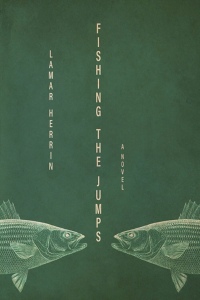 We’re giving a book away this week! One lucky reader will win a book of their choice, choosing from seven of our newest titles. From now until Sunday, July 21, we will spotlight one of the books up for grabs on our blog. Answer our questions in the comments or on social media, and you’ll be entered into the drawing! For more details on the giveaway, CLICK HERE.

Today’s featured title is award-winning author Lamar Herrin’s latest novel, Fishing the Jumps. In this work, Lamar Herrin explores the kaleidoscopic effect of memory while examining the rise and fall of life in the South. Set during a weekend fishing trip, two middle-aged friends sip Jim Beam and share stories as the past and present meld to reveal that what happens in the past rarely stays there.

We love this book , and we think you will too. So today, we want to share the opening couple pages with you. Enjoy!

I hadn’t told this story in I didn’t know how long. The truth was, outside of the family, I couldn’t be sure if I had ever told it. So why tell it now? For one thing, I liked and admired and trusted the man I was telling it to, Walter Kidman, a poker partner for the last twenty years, a lawyer in town who took on his share of pro bono lost causes, ten years my junior, which meant he’d just missed the sixties, both the exhilaration and the exhaustion that I had lived through. For another thing, the setting, was right, timeless in its way. We were in a lakeside cabin in the foothills of the Adirondacks, a cabin my friend had inherited, which had been built back in the WPA days. At first I’d understood that WPA workers had built it themselves, perhaps that it had even served as a sort of barracks for them, which probably hadn’t been the case. Walter was a big admirer of FDR, the nobility of his programs if not of his methods, but it was a modest little cabin, with a fieldstone fireplace, a screen porch, and a compact assortment of rooms, all with an ineradicable mustiness that took you generations back. And surely, maybe even most importantly, it was the lake itself, small enough to see from one end to the other, where motors were prohibited and the transportation of choice was canoes. Out over the water sounds traveled pure. A dog bark, the lakelong caw of a crow. A breeze crisped in the poplar leaves along the banks. One cabin up from Walter’s at five o’clock every evening an elderly man sat out on his dock and played his cello in the most meditative of registers, and that sound traveled too.

And we did fish, that afternoon we arrived. Of course, it was the fishing. Walter rigged up two New Deal–era casting rods with tarnished spinners. We tried a few casts, then while Walter paddled, I trailed the spinner along behind us. I thought I’d hung up in weeds until I felt a live tug on the line, an abrupt muscular contraction. The fish never jumped. A bass would have, and then tried to swim under the canoe, while this fish simply resisted until it couldn’t anymore. Still, because bass was what I’d mostly caught when I’d fished as a boy, I was thinking bass when the fish became visible alongside the canoe. It was streamlined and long-snouted, with tiny saw-blade teeth. A banded dark-to-yellowing green. The answer came to me even as I asked the question.

A little pickerel. You can’t eat them, but they’re fun to catch.

So it was the quietness, the birdsong, the leaves in the breeze, the trembling reach of the cello we were drifting out beyond, the unruffled water and maybe the way the pickerel looked at me out of the unlidded bead of its eye.

Here, Walter said, let me take him off the hook. You’ve got to be careful with those teeth.

I watched as Walter took out a small pair of pliers, just as long-snouted, and worked loose the hook. But the fish never stopped looking at me, self-contained and seemingly still in its element. When Walter held it up for me to admire, I nodded, and when Walter held it out to me, I shook my head.

He released it back into the water.

There was a lingering trace of its scent, then the breeze took that away too.

From his end of the canoe Walter was looking at me as he would from across the poker table, as though the bet were mine and sooner or later I’d have to tip my hand.

I didn’t mind losing a hand every so often to Walter. He was a firm-principled man whose boyishness was genuine and engaging. Stocky in build, with a round, slightly inflamed face, small active eyes, and curly gray hair. I had always liked that little leap of pleasure in his eyes when he turned over a winning hand.

So, as a contribution of some sort, a chip, say, that I held, I told him, There’s another way to fish, you know. It’s called “fishing the jumps.”

I’ve heard of that, Walter replied, with his characteristic eagerness. What’s that all about?

Chaos . . . , he repeated with a questioning turn, as though considering the appropriateness of the word itself, here at the cellist’s hour, on this noise-restricted lake. From end to end I didn’t see another canoe out on its waters. Most of the cabins were no less humble than Walter’s. Small and low-built with patchy screen porches, the screens like luffing sails, no longer taut. Other than the elderly neighbor who came out onto his dock at five every evening to serenade the fish and the birds, the lake seemed turned over to us. We had paddled about halfway down its length. It was surely then, as I shook my head, closed my eyes, and allowed my cousin Howie Whalen to visit me from forty years back, that the story I would tell later that evening took shape in me. Howie Whalen, “Little Howie” Whalen as I’d known him growing up, stood beside the motor in his outboard fishing boat, searching the waters of his boyhood lake for the telltale ripples of a school of minnows being run by a school of bass, all before the surface erupted in a boil as the bass closed in and began to feed. The instant the feeding started, Howie Whalen, still standing, fired his motor and, brandishing his spinning rod outfitted with a silver spoon, speeded into the area of eruption, casting as the boat roared in. He hooked a largemouth on his first cast, and had time to unhook it and throw it onto the floor of the boat, where it flopped, before he cast again into the still frenzied water and hooked his second. I had cast wildly, well beyond the target area, and by the time I could retrieve my lure and cast again, the feeding had stopped. Suddenly we were once again in the center of a becalmed lake and Howie was back beside his motor, scanning the waters for another school of running minnows and another feeding area about to erupt. He resembled Horatio Hornblower in that moment, back there striking his pose. I might have laughed, but didn’t. He was the master, a cousin two years my junior, dead now these twenty-odd years.

But it was the quietness, the glassiness of the water you looked out over until at the limit of vision you saw another school of minnows in a patch of sparkling ripples. Then, as the feeding began with the bass lashing their tails, you rushed in to join the commotion. Bass are territorial, Howie used to tell me; if you’re horning in on their action, they’ll feed that much more aggressively, until they’ve eaten their fill and the remaining minnows have escaped.

What will look like chaos to most mortals, I added, but not to this cousin I had.

Some kind of wild man? Walter puzzled. Some nature’s child?

I shook my head. I also steadied my nerve. Without warning, I felt my throat began to close. The last time I had seen Howie Whalen, his wife, in a flat and bitter voice, had declared, That man in there is not my husband. Then she’d admitted me to his sickroom.

You fish for the bass when they’re feeding in a school of minnows, I told Walter Kidman. The minnows are jumping and the bass are thrashing. Yes, it can get wild. You get in there close. That’s really all I can tell you.

But sitting on his screen porch that evening, with that evocative mustiness of rugs and pillows and daybeds and an ash-encrusted fireplace all around us, that smell of generation piled on generation, it all came rushing back. Sipping bourbon on the rocks, and with the bourbon the lingering echo of that cello spreading over the quiet water, a sound that should have corresponded to the solemn beat and flow of your blood as it circulated through your body if your blood weren’t, in fact, racing in a crazy rush as though to break free. I told Walter I’d had a family down there, down south, and had once, years ago, decades now, taken a friend with me on what was to have been a fishing trip, which had led to the two of us, this friend, a northerner, a New Englander, and me, being expelled. Expelled? Meaning hustled out of town? Ridden out on a rail? It might be funny in the retelling, I admitted to Walter, and it might even have been funny in an incredulous, drop-jawed sort of way at the time, but those were the sixties, years of such exaggeration that no detail was too insignificant to be politically charged, so even as you shook your head in disbelief it wore you out. A time Walter Kidman had not lived through, but I had.

Walter reached out into the dark to pour me another finger of bourbon. Little Howie Whalen’s father, Big Howie, of course, had been a bourbon drinker and so, to keep up with him, had been my aunt Rosalyn. September in the Adirondacks was a world apart from September down south, but the northern coolness was clear, unfreighted, conducive to storytelling, and with no June bugs clashing against the screen or cicadas shrilling on ten frequencies at once, I didn’t have a lot of competition.

This is a pretty tall tale, I warned my friend and host.

Aren’t they all? Walter said…

We hope you enjoyed today’s sneak peak. This excerpt got us thinking about famous openings lines. Do you have a favorite beginning to a novel? We’d love to hear it! Share a lovely opening with us in the comments below and you’ll be entered to win Fishing the Jumps: A Novel or another book of your choice from seven of our newest titles.

2 thoughts on “Giveaway Spotlight – FISHING THE JUMPS: A NOVEL”